THE WAY FORWARD FOR THE INDIAN REAL ESTATE INDUSTRY 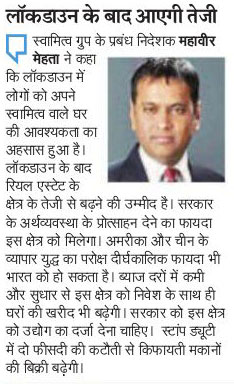 prepared and the leading economies of the world such as the United States, China, Germany, Europe and many others have been hit hard.

With the US emerging as the epicenter of this pandemic, and considering China and Europe are already badly hit, the heat is on the world economy and a phase of slowdown is sure. It is still not clear how much time it is going to take for the world to recover from the pandemic and see that it doesn’t reappear which is the priority for all major economies. Apart from dealing with health and safety concerns, it is also necessary for all the world’s leading economic countries to come up with stimulus plans to ensure that their economies survive in this time of negative growth of GDP.

If we look at history for inspiration, during the previous recession that hit the US economy way back in 2008 we see that the major cause was the US Government’s failure to Regulate financial institutions. In the recession of 2008, India was better positioned and could come back fast because of reforms, falling prices, boom in NBFCs and Government schemes.

As you all know the Indian Real Estate was already in correction mode and it has already experienced a significant price correction before this pandemic. Major factors like De-monetization, RERA, GST reforms & failure of large NBFCs in 2018 led by IL&FS have already given real estate a big jolt. Now in this present scenario when the world is under lockdown the only thing on people’s minds is “HOME” and they have started valuing the size of their home, the comfort of the working from home and the emotional security of being with loved ones during the lock-down. This has made them realize the necessity of owning their “OWN HOME”. Owning a home has always been a major milestone in a person’s life and it is everybody’s life time dream to own a home.

INDIAN REAL ESTATE WILL GROW FASTER THAN OTHER ECONOMIES, WHY?

Indian Real Estate is going to come back faster than expected and it is going to be the front-runner for economic growth.

In my opinion various asset classes like Co-living, Co-working, and the culture of “Work From Home” has given birth to new requirements for offices, housing, hospitality, warehousing, and retail. The unexplored sector of student housing c will also contribute to a surge in the real estate market. As such, I have no doubt that it is an Industry which is going to survive this storm and emerge stronger.

This is time to show our leadership by being patient and calm. We need to build relationships with stakeholders, reduce your overheads. We need to do a thorough cost analysis and keep an eye on purchases and sales actively. This is the time to collaborate with colleagues so don’t hesitate to ask. Try to liquidate assets and keep cash. Try to reduce debt and bring-in some new construction methodologies.

There is no need to worry – You will definitely see the light at the end of this seemingly endless tunnel. Let us all remain positive and thrive for positive things to happen so that the power of our subconscious minds will drive us to be successful.

Wellness Lifestyle – Ways to Make it Part of Our Daily Routine
February 8, 2021

Renting Vs Buying: Which is More Advantageous?
January 18, 2021

How to Relieve Mental Stress and Boost Mental Wellness
January 11, 2021

Design Tips to Make Your Home a Wellness Haven
December 21, 2020